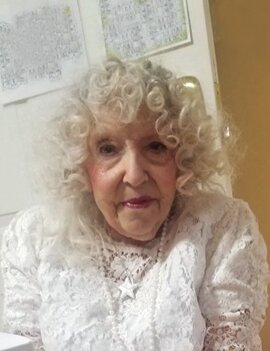 Please share a memory of Gloria to include in a keepsake book for family and friends.
View Tribute Book

Gloria Margaret (DeLellis) Ricci, a licensed beautician and the former owner of Corinthians Beauty Salon in Somerville in 1962, passed away after living a full life on Tuesday, January 4, 2022.  She was 92 years old.  Gloria was born in Somerville.  She was one of five children born to Michael and Angela DeLellis.  She grew up in Somerville and was a graduate of Somerville High School.  Gloria studied at the Wilfred Academy for Cosmetology. She also graduated the John Robert Powers School of Modeling. She was just 18 years old when she married Rudolph Valentino Ricci in 1947.  They lived in Cambridge for a short time before building a home in Belmont Hill in 1963.  They lived in that home for 40+ years and it was where she raised her children, hosted holidays, dinner parties, pool parties, and other social events.  Her children were her everything. She loved her brothers and sisters, deeply.  Gloria was no doubt the first “influencer” of all things “Fashion”. She always looked beautiful. Her perfect hairstyle, make up, and outfit, and at only 5 ft. 2 in. tall, we mustn’t forget the high heels.  Gloria was also filled with warmth, love, kindness, and generosity.  Her generosity to others was boundless, she always took care of her family especially her sisters and beloved sister-in-laws (Marion DeLellis, Tina DeLellis, Lee Parcella and Francis Ricci) of whom she absolutely adored.

Whenever at a social gathering (and even up until recently) at her assisted living residence, she welcomed new residents, made them feel at home, and introduced them to her friends.  She was like a goodwill ambassador wherever she went.

Gloria also enjoyed travelling all over the world from the beaches of Acapulco, and the Caribbean Islands, paired with lots of shopping to bring home gifts for her family. She traveled to Athens, Rome and Paris with her husband “Val”.  Her husband always bought a piece of jewelry on her trips – a perfect remembrance of life and times well lived.

As outgoing as Gloria was, she wasn’t loud, in fact she had a quiet classic demeanor. Her priority was her Catholic Faith. Later in life, she had a ritual of attending daily Mass and learning stories of the Bible.

Gloria was not boastful. She only wanted to live life surrounded with family and friendships. Gloria always could make us laugh. She would innocently get in predicaments and do funny little things, make silly gestures,and tell funny stories.  Those close to her nicknamed her “Lucy” every time there was that “little snafu” she needed to remedy before Val got home.

Gloria will be terribly missed and never forgotten.  She has touched so many lives with her gentle ways and tight hugs.

Gloria was the wife of the late Rudolph Valentino Ricci.  She was the loving mother of A. Robert (Bobby) Ricci and his late wife Linda Blackman of Belmont and Dawn M. Ricci & her husband Anthony DeLorenzo of New Jersey.  She has two sisters, Annemarie Nickinello of Lexington, and Roberta Most of Arlington. When the three of them were together they were unstoppable.  She was also predeceased by her brothers; Michael and John DeLellis. She was the proud grandmother of Melissa Ricci of Dedham and Michael Ricci of Utah. She was the favorite aunt of many nieces and nephews.

Visiting hours will be held at the Edward V. Sullivan Funeral Home, 43 Winn St., Burlington on Tuesday, January 11 from 4-7pm. Funeral from the Sullivan Funeral Home on Wednesday, Jan. 12 at 9am, followed by a Mass of Christian Burial at St. Margaret Church in St. Veronica Parish, www.stveronicama.org, 111 Winn St., Burlington at 10am. Services will conclude with a burial in Woodlawn Cemetery, Everett.

Share Your Memory of
Gloria
Upload Your Memory View All Memories
Be the first to upload a memory!
Share A Memory