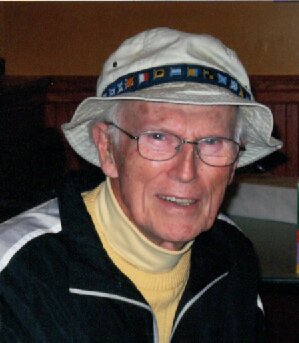 Obituary of Warren A Waite

Please share a memory of Warren to include in a keepsake book for family and friends.
View Tribute Book

Link to live stream of the funeral service.

The link (above) will bring you to our facebook page (sign-in is NOT required).  A live-stream of the funeral service will begin at 1pm on Tuesday, Feb 1st.

Warren Arthur Waite, 101 years old from Burlington, MA died peacefully at home surrounded by his family on January 20th, 2022, following a brief illness. Born in Quincy MA on Sept. 22nd, 1920, he moved to Watertown at the age of 5 with his parents Clara and Arthur Waite and his older brother George. He went on to graduate from Watertown High School in 1938 and then Boston University, where he received his degree in Chemistry in 1942. Warren spent the early part of his career employed by Avco in Lowell where he felt privileged to be part of a team who worked on the heat shield for the Apollo rockets providing protection from the high temperatures they were exposed to on reentry. He then did considerable work in plastics and later in water purification, developing a patent involving a process of reverse osmosis.

Warren had developed an early love of skiing, an activity which led him to the Old Colony Ski Club where he had the good fortune to meet Miss Betty French. They married on June 30th, 1950 and soon moved to Burlington MA. They enjoyed skiing together, primarily in the mountains of New Hampshire before settling down to have a family. Warren has 2 daughters Janet and Betty Ann whom he passed down his love for skiing as well as science. Warren was also an avid sailor, building boats at home, that are still being enjoyed today.  He was a member of the Ipswich Bay Yacht Club and enjoyed many years of sailing the waters around Plum Island and Cranes Beach with family and friends.   Warren loved Cape Cod and the Islands where he spent the majority of his summers with family and friends and enjoying lazy days sailing and at the beach.  Warren continued to enjoy his work on rainy days, saving the sunny days for sailing until age 75 when he retired permanently.  During his 25-year retirement, Warren and his wife Betty were blessed with good health. He felt very fortunate that he was able to thoroughly enjoy his family and the things that he loved.

Warren is predeceased by his parents, Clara and Arthur, and his older brother George. He is survived by his loving wife of 71 years, Betty Waite, along with his daughters, Janet Waite of Billerica, MA, and Betty Ann Lockhead of Weymouth, MA, his grandchildren, David Lockhead, Andrea Lockhead, and Jordan Waite, and his great-grandson Roman Waite.

The wake and celebration of his life will be held at the Sullivan Funeral Home 43 Winn Street Burlington MA on Tuesday February 1st from 11:30am-1:00pm, followed immediately by a funeral service at 1:00pm.

In lieu of flowers, donations in Warren's memorymay be made to the Salvation Army of Massachusetts (his favorite charity).

Share Your Memory of
Warren
Upload Your Memory View All Memories
Be the first to upload a memory!
Share A Memory