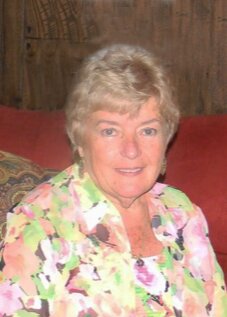 Please share a memory of Penny to include in a keepsake book for family and friends.
View Tribute Book

Marigrace “Penny” Silva, a woman who loved people and making new friends, passed away unexpectedly on Thursday morning, March 24, 2022. She was 80 years old. Penny was born and raised in Medford. She was one of 2 daughters born to Joseph and Helen Madden. She was a graduate of Matignon High School and then earned her Associates Degree from The Chandler School for Women. She met a Cambridge boy, Joe Silva, at the Bal-A-Roue Roller Skating Rink in Medford when she was in high school. They married in 1960 when Penny was 19 years old and started their life together living in Somerville. Her husband Joe went from serving in the Massachusetts National Guard to being called to Active Duty. They settled in Burlington in 1968 where she proudly raised her two daughters. When the girls were settled in school, she went to work as a secretary in the Burlington school system working at a number of the schools in the community. As with many military families, there were times when the Army calls and you pack your bags for a new assignment. During Joe’s 34 years in the Army, he was fortunate to spend much of his time both in the Guard as well as on active duty. His assignment included Hanscom Air Force Base, Fort Devens, Fort Meade in Maryland and Forces Command in Atlanta, Georgia. Penny knew the importance of the opportunities for advancement in the military with each assignment and wholly supported him as Joe rose up the Army ranks, even moving across the country with him to his out of state assignments. She embraced the change, met new friends, worked as a Contracting Specialist for the Air Force for 6 years, and made the most of the experience. Joe later retired as Lieutenant Colonel and they were able to move back to their Burlington home.

Anyone who has ever met Penny for even a short while, quickly found her to be engaging, friendly, and exuding joy. She could go into a grocery store for a quick couple of items and would end up leaving an hour later because she was either catching up with an acquaintance or meeting a new friend. She was talkative, vibrant, always had a quick or funny line, maybe even a little crazy but always smiling. She enjoyed crocheting and knitting. She was a member of the “Knitwits” at the Burlington Recreation Department. She was an active member of the Billerica Irish American Club and the North Shore Irish Society in Melrose. She loved entertaining her family and friends. Her pool was the gathering spot especially for her daughters' and granddaughters' friends on hot summer days. She loved hosting 4 th of July cookouts for family and cherished friends. She enjoyed being involved in her daughter's lives and continued that involvement for her grandchildren as they participated in sports, dance, and any other activities. She was always present at school events and gatherings and loved spending time with her grandchildren. Penny was truly a special and unforgettable woman, and her memory will always bring a smile to the faces of all who knew her.

Penny was the beloved wife of 62 years to Joseph Silva. Loving mother of Suzanne Gaudio & her husband Ron of Burlington, Elaine Liguori & her husband Randy of South Hadley, and the late Thomas Silva. Sister of the late Helen McGee. Proud grandmother of Kyle Liguori & his wife Brooke, Erika Liguori & her fiancée’ Nicholas Christman, and Isabella Gaudio & her boyfriend Cameron Cappella. Great grandmother of Jacob & Lucas Liguori. Penny is survived by her sister-in-law Louise Mosca of Somerville. Also survived by many nieces, nephews, and friends. Visiting hours will be held at the Edward V. Sullivan Funeral Home, 43 Winn St., Burlington on Sunday, March 27 from 3-6 p.m. Funeral from the Sullivan Funeral Home on Monday at 9 a.m. Followed by a Mass of Christian Burial at St. Margaret’s Church in St. Veronica Parish, www.stveronicama.org, 111 Winn St., Burlington at 10 a.m. Services will conclude with a burial in Holy Cross Cemetery, Malden.

Memorials in Penny’s name may be made to the Billerica Cat Care Coalition, www.billericacatcarecoalition.org, P.O. Box 141, N. Billerica, MA 01862.

Share Your Memory of
Penny
Upload Your Memory View All Memories
Be the first to upload a memory!
Share A Memory