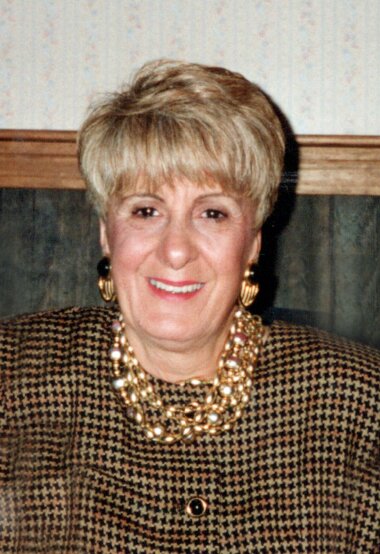 Click the link above to be connected to St. Barbara's website to view a live-stream of the funeral mass.  The live-stream will begin a few minutes before 10am on Friday, January 20th.

Sylvia “Gram” Grinnell, a longtime resident of Burlington passed away peacefully at her home in Salem, NH with her family at her bedside on Sunday afternoon, January 15, 2023.  She was 84 years old.  She was born in the family home in Belmont in 1938.  She grew up in Arlington where she attended St. Agnes Parochial School and then graduated from Arlington High School.  She married and the family settled in Burlington in 1963.  Sylvia helped her husband start HVAC Engineering and then Grinnell Mechanical, and later as her children grew she worked part time at the Burlington location of Northeastern University’s bookstore.  However, Sylvia’s greatest job was that of mother, grandmother, and great grandmother.  Her home in Burlington and her cottage in Salem, New Hampshire were her favorite places to spend with her family and close friends. It was where she raised her family, saw them go on to become parents, and grandparents, and she just enjoyed every moment of the journey. Gram was often seen cheering her grandchildren on at Burlington Baseball Parade, beeping her car horn at Simonds Park when they were at bat, and proudly sat on “her bench” at the common during Prom season.  The small cottage on Arlington Mill Reservoir was always crammed with family. The home was the gathering spot for her family, grandchildren and friends, and neighborhood children.  She loved seeing them playing in the yard, boating, jet skiing, fishing, painting their fingernails, and just enjoying each other’s company.  She was “Gram” to her grandchildren and all of their friends.  She treated them to her golden pancakes, famous grilled cheese sandwiches, Romano’s Pizza, and her annual summer kick-off trips to Pips and the local candy store to fill up “Gram’s candy jar.” Uno and Old Maid were favorite games to play with the children.  For some reason, the kids always won.  In the evenings, her own kids and friends then grandkids were often found sleeping on bunk beds, couches, and air mattresses scattered throughout the home.  Over the years there were also family vacations to Bermuda and Popponesset on Cape Cod with family friends, however, her three trips to Italy with her sisters and nieces to visit her aunts, uncles, and cousins in Avellino provided her with abundant happiness and comfort. Sylvia’s greatest accomplishment is her family.  She was so proud of each family member, loved them all as they were her favorite, and they will be her legacy.

Visiting hours will be held at the Edward V. Sullivan Funeral Home, 43 Winn Street Burlington on Thursday, January 19 from 4-7pm. Funeral from the Sullivan Funeral Home on Friday, January 20 at 9am, followed by a Mass of Christian Burial in St. Barbara Church, 138 Cambridge Road, Woburn at 10am. Services will conclude with a burial in Pine Haven Cemetery, Burlington.

Share Your Memory of
Sylvia
Upload Your Memory View All Memories
Be the first to upload a memory!
Share A Memory