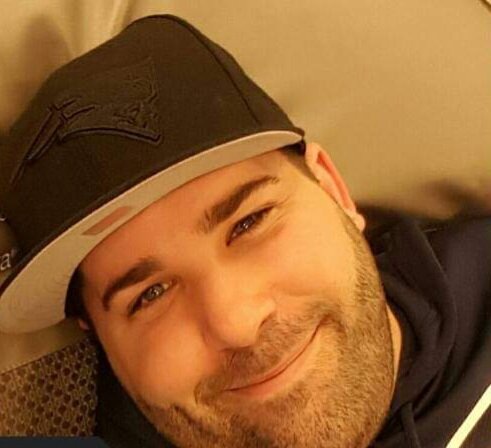 Derek John Bondeson or “Bondo,” a machinist from Tewksbury, passed away unexpectedly at the age of 37 on January 16, 2023. Derek was born in Lowell to his parents, John Bondeson and Catherine Ellard. Derek grew up in Westford and graduated from Westford Academy before going to college.

After trying college, Derek went on to work in a number of different industries. He spent ten years working with the American Salvation Army and helped out their Salvation Army Softball team with his play. He worked in the culinary department and then moved up to intake coordinator. Derek even served as a pastoral counselor, providing therapy services that integrated modern psychological thought with religious teachings.

Like many Bostonians, Derek was a die-hard New England sports fan. A perfect evening to him was sitting back and watching the Bs, Cs, Sox, or Pats at home or with friends. Derek also loved to spend time down on Cape Cod and Buzzards’ Bay. He loved deep sea fishing on his dad’s boat, or just casting a line out from the shore, however he could hook a striper. Fishing was a passion of Derek’s and he got a huge kick out of teaching his nephew Danny to fish.

Derek loved to golf and was always excited to go to tournaments in the summertime with his friends. He also traveled to the Berkshires over the last couple of years and loved staying in the cabins out there. Derek traveled down to Foxwoods and found a new admiration for playing bingo. He had a ton of fun playing poker online after that.

Derek will be remembered by family and friends as a beautiful soul, with an incredibly kind, sweet heart. He loved taking care of others, both humans and pets, as he was a beloved foster dog parent. He was always incredibly genuine and would truly give the shirt off his back for someone in need. It was this giving nature that led him to his work with the Salvation Army, a role that was made for Derek, as it gave him the platform to help those in need. Derek was also always good for giving you a good laugh. Whether it be arguing over something he was sure to be correct or just a story he had.

Derek was the beloved son of John Bondeson and his partner Teresa Blanchette of Woburn, and Catherine Ellard and her husband Ollie of Auburn. He was the dear brother of Melissa Bates and her partner Kevin Roberts of North Smithfield, RI, Brittney Bondeson and her fiancé Austin Martineau of Chelmsford. He was the caring stepbrother to Carisa Blanchette of Somersworth, NH, Melody Blanchette of Hampton, NH, and Darien Ellard of West Springfield. He was the proud uncle of Brody & Lyle Williams, Danny Bates and Kellan Robinson. Derek was the beloved grandson of Ken & Jane Bondeson of Peabody, Nancy & Frank Haage of East Haddam, CT and Betty Ozolins and the late Armins Ozolins of Essex. Derek was a loving boyfriend to Lindsey Jack and her daughter Morgan. Derek is also survived by many dear aunts, uncles, cousins and friends.

Share Your Memory of
Derek
Upload Your Memory View All Memories
Be the first to upload a memory!
Share A Memory